First Week – After my eight hour flight from Washington D.C. to Munich, I jumped onto my next flight headed to Chișinau. I didn’t know what awaited me there; I just knew that I was going to a part of the world that I had never experienced before. Cool weather greeted me as well as a smiling and cheerful contact person from American Councils. As soon as I landed, I was loaded into a taxi and swept off to meet my host family. Irina, the American Councils representative, spoke perfect English and guided me around the city as I peered out the windows taking it all in. The buildings were dilapidated and the billboards and signs were written in Russian and Romanian, something I was expecting, but that still caught me off guard a bit. 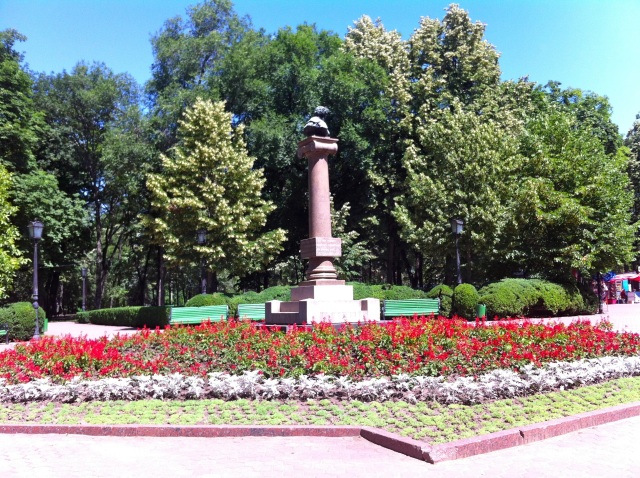 Second Week – I’ve started my Romanian classes and I’m extremely happy with the structure of the lessons and the rapport that I have with my teacher, Svetlana. She is patient and kind and it is clear that she is passionate about teaching. My host family, Natasha and Constantin, have been so welcoming and helpful. The first day that I arrived, Natasha cooked a traditional and delicious meal consisting of vegetable soup and mămăligă (made from corn meal) with brînza (sheep cheese), mmmmm. She had guests over after the first week to celebrate her birthday. The meal consisted of fresh cucumber and tomato salad, chopped carrots, meat skewers, mushrooms and homemade cake. We ate outside with her warm and talkative family. After we ate, one of Natasha’s family members made homemade placintă, a typical Moldovan pastry filled with cheese.

As for my average day, it starts with a ride on a Maxi Taxi, large vans that people use to get around the city safely and efficiently, that drops me off in downtown for my 8am class. I finish class at 10:15 and head over to the beautiful park about 5 minutes walking distance from the American Councils office and people-watch. After relaxing in the park, I eat at a very inexpensive restaurant where I can get homemade soup, salad and bread for about $1.50!

Third Week – I’ve started to see a huge jump in progress with my Romanian language. I understand so much more than I thought I would at this point in time. My speaking is still a little behind but I’m confident that in a month I will be able to sustain a conversation without hesitancy. I just returned with my host family from Carpineni, a tiny village located about an hour’s drive outside of Chișinau, where my host parents were born and raised. In the village there is no running water, at least in the house we stayed in, so we had to collect water from a well and use an outhouse. The country air smelled so fresh and large expanses of cornfields and vineyards surrounded us. I also noticed that many of the villagers did not have cars, but used horses and buggies to get around. Now that I think about it, I’ve been so busy that I can’t believe it’s already been three weeks!