I worried about language before I landed in Moscow. Heck, I’d been studying it for two years, but I wondered how my skills would stack up against people who had been studying longer or studying at an institution (I studied with a tutor, then independently).

Really, I should not have worried so much. My tutor had warned me: at first, it might feel as though I do not know any Russian, but as time passed, I would find a comfort zone. The first two weeks were a bit shaky, and I questioned how much I knew, just as my tutor had predicted. Staying with my program group did not help either—with two members who spoke no Russian, getting practice seemed impossible.

Class helped, sure, but what really helped was exploring alone. One Saturday morning, I woke up earlier than my roommates and headed out. My first stop: Red Square. I intended to visit Lenin, and with the Mausoleum’s weird hours, I knew it might be my only chance. As I proceeded through security into Red Square, the guard asked what was in my water bottle. I froze. However, after he repeated himself, I was able to gather my wits and tell him it was water. A small victory, sure, but I’d relied on only myself. 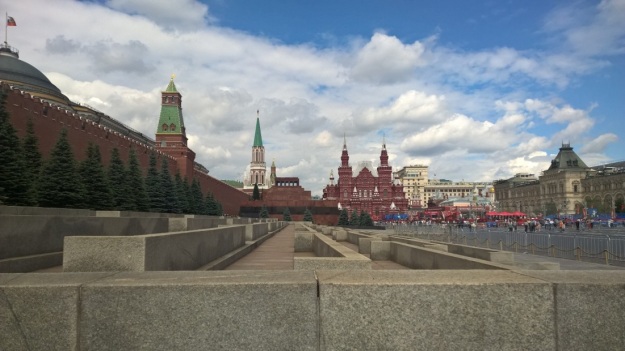 I could talk about the surreal feeling I had when I looked upon Lenin’s body, but that’s not what this post is about. No, let me instead tell you how, when I went to Gorky Park to explore, I was able to order ice cream without pointing. It sounds so simple, but it’s easy to fall into the point-to-order method when the others in the program use the method. However, I ordered ice cream, paid, and was on my way, all in Russian. And what’s more Russian than ice cream in the park?

It did not merely end there, however. I was hungry for some real food, and I’d heard and read about Штолле too many times not to try it. When I arrived, I found myself telling the cashier I didn’t speak much Russian, but then proceeded to speak only in Russian anyway. I successfully ordered two пироги, and I understood the total price when the cashier told me. Combined with my other experiences that day, I felt good.

Reflecting on it all while sitting on the metro, I realized how important it is for study abroad students to branch out alone. It is only then when you can be fully immersed and forced to use the language skills that you DO have (even if you feel otherwise). Explore alone. Be uncomfortable. Only then will you find a comfort zone.