My time in Kazakhstan has been flying by and I can confidently say I have learned so much and will return to the States with greatly widened horizons. My classes have been intense with Grammar, Reading/Writing, Listening, History and Foreign Policy of Central Asia, Literature, Kazakh culture, and Phonetics. However, I would say that a great amount of my learning has happened outside of the program.

One of the most interesting things about Kazakh culture that I have learned here is their emphasis on family. The connections and traditions they have with family seem deeper to me than any other culture I’ve known, likely because it’s embedded in their history. In the beginning of Kazakhs’ history, the Kazakh people were separated into three different clans or ‘Zhuzy’. To this day, any Kazakh can tell you which Zhuz they belong to and their ancestors belonged to and they continue to pass down this knowledge to their children. One evening with my family, we had a dinner for my host mom’s mother’s death anniversary. This really surprised me because I had never heard of observing such an anniversary. They do this every year to remember their loved one who died and also to remember all of their other ancestors. My host family knew an impressive amount of their ancestors by heart, even some knew the birth year and death year of each. I was embarrassed to admit that for the most part Americans don’t take this much time to remember their ancestors the way Kazakhs do and that I barely know the names of my great-grandparents, so it was really eye-opening to experience this tradition. 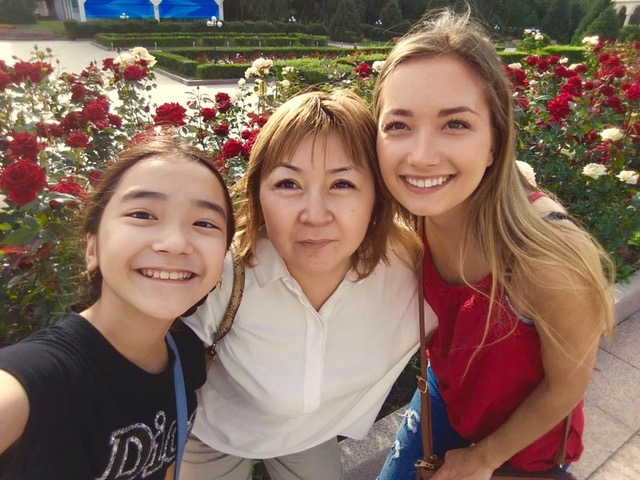 Then everyone began eating the enormous spread of food on the table which included Kazakhstan’s national dish, Beshbarmak, which in itself gives another insight into Kazakh culture. Beshbarmak is basically flat noodles with mounds of horse meat on top and it’s delectable. The fact that Kazakhs eat horse meat has caused many Americans I’ve told this to, to grimace at the thought of eating horse. Of course there is a historical background to this dish, too. Kazakhs were originally nomads living on the steppe. They survived off their herds of cows, sheep, and horses. However, the horses they ride have always been different than the ones they eat. Kazakhs breed and raise some horses specifically for eating, and others specifically for riding. In the United States we just don’t share that same idea about horses. The dish Beshbarmak means “five fingers” because it is meant to be eaten with your hands. It’s also placed in the middle of the table where everyone can reach with their hands because most meals in Kazakhstan are meant to be shared. It’s actually expected that lots of different foods are shared.

For example, I went to a Korean store with my host sister and I bought myself a treat and a treat for my host sister, but upon arriving home and beginning to eat our snacks, a try turned into my host sister eating half of my treat, but I did also had half of her treat. A different time when I warmed up some of my leftovers from a restaurant, my host sister wanted to try it since she had never tried this particular dish before, but again she ended up eating half of it with me. At first I was a little annoyed with this but when I remembered learning about how beshbarmak and lots of other Kazakh dishes are meant to be shared, I understood that that’s just the culture. I think it’s great; I’ve noticed Kazakhs are very giving. One day after having spent all the money that was in my wallet on unexpectedly expensive water park tickets with my host sister, a lady on the sidewalk asked us to buy flowers but I said that I just really didn’t have any money right now. She extended the flowers towards us and said “take it.” Free flowers.

I think these things I’ve learned, about the giving, the food-sharing, and the anniversary of my host mom’s mother’s death, made me realize how kind of self-centered American culture can be. One could argue that remembering your whole family lineage is self-centered but not so much on the individual level that it is in the States. Family and sharing here have an importance that I haven’t experienced in the States or elsewhere and I’ve been lucky to have a small part in that this summer with my host family.