Though Kazakhs pride themselves on their nomadic legacy, very few Kazakhs still engage in nomadic pastoralism. Due to the forced sedentarization started under Imperial Russian control and intensified under the Soviet Union in the late 1920s and early 1930s, Kazakhs today almost entirely live in apartments and houses. The yurt, and the way of life it enabled, have largely been transformed almost exclusively into symbols of national pride and ethnic belonging, rather than a means of enabling the mobility necessary for animal husbandry and livestock grazing. Now, many Kazakhs go to jailau, or summer pastures high in the mountains, for purposes other than pastoralism. This summer, I was lucky enough to follow along.

Kazakhs speak about jailau in reverent tones, and I expressed my regret for never having seen one myself Raikhan, one of my Kazakh language teachers here. A deeply kind person, Raikhan mentioned that she has been going a couple times a year to a jailau run by some family friend, and I would be welcome to tag along with her and her daughters for a weekend. Overjoyed, I agreed, and that weekend we bundled into a car and drove from Almaty out to her jailau, located in the extreme southeast of Kazakhstan, bordering both Kyrgyzstan and China. 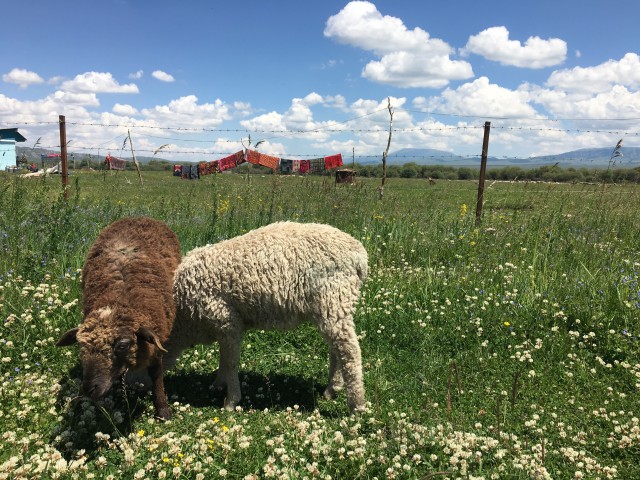 This jailau is located close to a small town where Raikhan was assigned to teach under the Soviet Union, and the son of the friends she made during her posting run the jailau now. There was a yurt, but it mostly for overflow for guests that didn’t fit into the three little bedrooms constructed in the middle of the meadow next to a small river. We soon found out that families and guests pay to stay at the jailau not only for the fresh air, rustic cooking, and the cool respite from sweltering Almaty, but mainly to take part in saumal “therapy.” Saumal is the lesser-known cousin of kymyz, the Kazakh national drink—fermented mare’s milk. While kymyz is to many Westerners an acquired taste (it always tastes like smoky sour milk to me), saumal is unfermented mare’s milk, ideally straight from the horse.

Every two hours, Raikhan’s friend’s son would milk a mare outside and bring us the sweet, warm milk to drink. This drink is apparently laden with curative powers—it strengthens one’s imunitet and helps with all sorts of ailments (kymyz, for its part, is rumored to help cure tuberculosis, a disease with a high prevalence in the former Soviet Union). For maximum effect, one must drink it every two hours during daylight hours for an optimum of 10 days, which explains the rustic staying quarters. In addition to sau–mal, we ate fresh butter, cheese, qaimaq (clotted cream), and delicious home cooking provided by Raikhan, with dishes washed and tea boiled with water from the stream near the site. During the day, we wandered through meadows covered with wildflowers, relaxed in the fresh air, chatted, and, of course, drank saumal.