After months of living in the modern metropolis of Almaty, my fellow Americans and I decided to embark on one last adventure before the end of our semester together in Kazakhstan. Lucky enough, we had befriended a local student at our university who invited us to visit his аул (aul/the Kazakh word for village) in western Kazakhstan, near the border with Uzbekistan in what would become my favorite experience during my time here.

Although the village was over 12 hours away by bus from our home base in Almaty, the journey ended up being one of the best parts of the trip. Here in Kazakhstan (and probably most of the former Soviet Union), there are лежачие автобусы (laying buses), in which there are rows of bunk beds along the windows. This was a truly foreign concept for us Americans, but the sheer convenience and comfort makes me wish we had something similar back in the states (although I’m pretty sure such a bus would fail most American safety standards).

Upon arriving in the аул, which was a mere stone’s throw away from Tashkent, we were greeted by perhaps the most hospitable people I’ve ever met. They immediately offered us a huge meal, complete with конина (konina/horsemeat in Russian), endless cups of tea and most importantly бешбармак (beshbarmak/means “five finger food” in Kazakh), the staple of traditional Kazakh cuisine. The dinner table was a constantly revolving door of family, friends and neighbors who stopped by to say hello and eat with us, the strange new guests of their village. After meeting dozens of people, we asked our hosts just how many people lived in their home and no one was able to give a clear answer. They just knew it was A LOT. 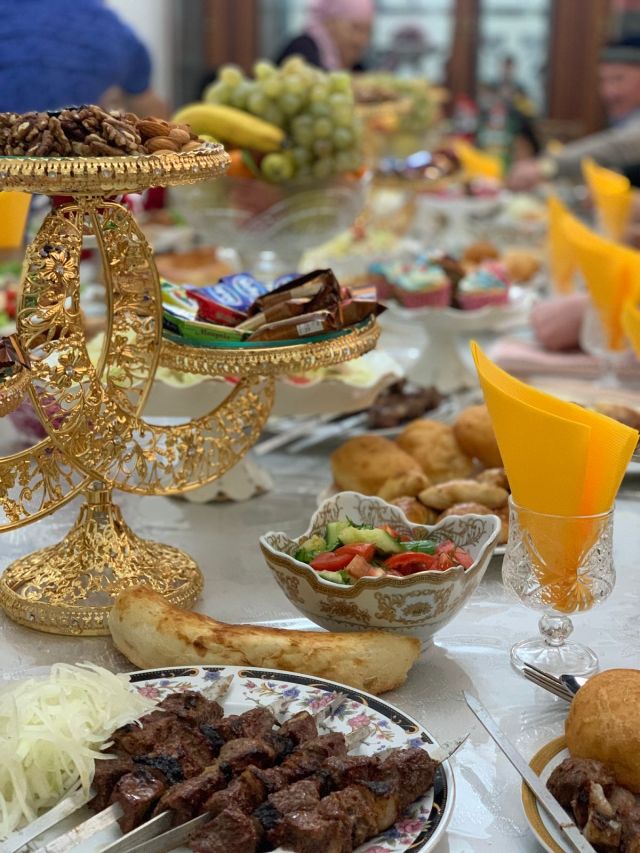 After an evening in the banya and a night of rest following our long journey, we embarked on what felt like a celebrity tour. Word had seemingly gotten out that a group of Americans were in town, as we were invited from house to house for every meal of the day. It seemed like every three hours we were eating again, and no one seemed to understand that the human stomach can only hold so much бешбармак (beshbarmak) before it explodes.

Each meal presented us with a new experience and different perspective of Kazakhstan. Some were reserved for just the men of the house, others included everyone, even the dozens of children in the family, and our last was a persistent group of young locals who asked us to sing some “traditional” American songs (we agreed on “Wagon Wheel” and “Old Town Road”…the remix of course). 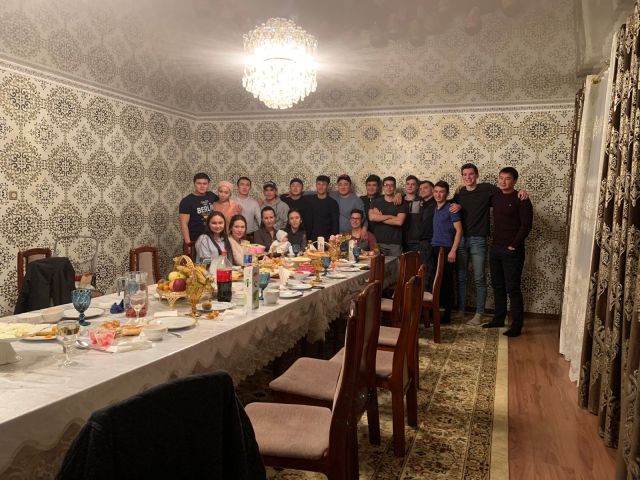 Perhaps the most eye-opening aspect of the village was the role that horses play in everyday life. Despite the fact that Kazakhs love конина (konina/horsemeat), they have a very special relationship with these animals that stretches back centuries to their nomadic lifestyle. I’ve been told by many people that Kazakhs never eat the horse they ride, which is not uncommon in the villages (both for sport and transportation), but the others raised as livestock or found in the wild are fair game. While walking through the аул, we stumbled upon a group of men in the neighborhood preparing to slaughter a wild horse. Perhaps sensing our morbid curiosity, they invited us to watch. My stomach somersaulted as they surgically sliced the horse’s neck, but the men assured us it was the most humane and painless way for the animal. It was undoubtedly sad to watch, but I felt that it was important to understand where the meat I eat comes from and I was comforted by the fact that these men truly did carry out the deed with grace and respect.

Later that day we saw the reverse cultural role of horses as we ventured into an even more rural part of the country to watch кокпар (kokpar), the national sport of Kazakhstan. This game is popular throughout Central Asia and involves groups of horse-mounted men trying to place a legless goat carcass in a “goal” (I promise you this is a real thing). It was truly insane to watch the scrums of horses wrestle for position as their riders whipped one another in an attempt to grab the 50kg carcass. Television crews filmed the action, drones flew above the violent scrums and an announcer excitedly yelled in Kazakh, encouraging the crowd to place their bets on this ancient game. People were baffled by our presence, but we assured them that we were longtime fans of the sport and even placed a 500 tenge bet on some random team (I didn’t win).

All in all, the village was by far my favorite experience during my fall semester in Kazakhstan. I’m very lucky to have had to opportunity and extremely thankful to my friend for inviting us to his home. I’m going to miss my American friends leaving this semester, but I look forward to all the new memories that await me in the upcoming months.